Posted on December 10, 2019
Birmingham-based QualitySolicitors Davisons has raised an incredible £4,500 in the short space of four months for local charity group HomeLess One. The group provides an essential meal service to Birmingham’s community by offering hot meals and drinks seven days a week.

The law firm decided on backing the charity with a fundraising campaign and helping to raise awareness of homelessness after learning about the endemic in their local community.

QualitySolicitors Davisons Managing Director Gary Davison said: “This fundraising campaign was a great opportunity to help address homelessness through the amazing work local charity HomeLessOne does day in and day out; they help keep some of our most vulnerable community members fed.”

According to a damning report by Shelter, Birmingham is ranked 22nd nationally for the number of people experiencing homelessness and is the worst region across the West Midlands. Homelessness levels are rising, with 15,538 people now homeless in Birmingham – or one in 73.[1]

Figures released by the CHAIN database revealed that Birmingham has the fourth-most rough-sleepers in England (91 people), behind Westminster (306), Camden (141) and Manchester (123). The death of Birmingham city centre rough sleeper Kane Walker in January reflects a rising trend in the number of people who have died on the streets or in temporary accommodation in England and Wales, which in 2017 was up 24% in five years.[2]

Homelessness does not just apply to rough sleepers, it also encompasses those in temporary accommodation and those experiencing ‘hidden’ homelessness, where people have accommodation but it is unsuitable or overcrowded.

HomeLess One representative, Moe Nawaz, said: “Volunteers from QualitySolicitors Davisons have been raising money for the HomeLess One kitchen and have been doing an incredible job. They’ve raised £4,500, which is going to go a long way towards buying much-needed sleeping bags, socks, gloves and hats for the homeless community of Birmingham.”

June marked the official launch of QualitySolicitors Davisons’ fundraising campaign, when two firm partners joined semi-professional athlete Ian Dempsey to take on a leg each of the Birmingham Triathlon. 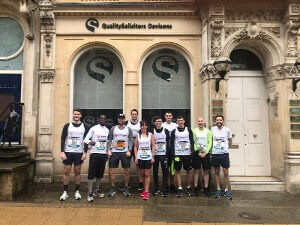 While the half-marathon was cut short by one mile on the day due to a ‘suspicious vehicle’ in the Cannon Hill Park area, subsequently declared safe, the team persevered to complete the available route with the drive of fundraising at their heels. The team crossed the finish line in an average of 1 hour and 46 minutes.

Reflecting back on the team’s fundraising efforts, Mr Davison said: “I’m incredibly proud of the team’s efforts in pulling together and putting in the hard yards to raise this impressive sum for a very worthwhile cause.”